The vulva is the name given to all the visible female sex organs.

Due to the pandemic, there have been delays in us updating this information as quickly as we would have wanted. Our team is working hard to put this right.

The vulva is the name given to all the visible female sex organs. It is made up of:

Between the labia are two openings:

At the front of the vulva, above the vagina and urethra, is the clitoris. This small structure is very sensitive and helps with sexual response and orgasm.

On either side of the vagina are two small glands called Bartholin’s glands. These make a fluid that acts as a lubricant during sex.

Above the vulva is an area of fatty tissue called the mons pubis.

Further back, under the legs, is the opening to the back passage (anus). It is separated from the vulva by an area of skin called the perineum.

The area where the skin creases at the top of each leg is called the groin. The groin contains lymph nodes, which are part of the lymphatic system.

Vulval cancer and the lymphatic system

The lymphatic system helps to protect us from infection and disease. It also drains lymph fluid from the tissues of the body before returning it to the blood. The lymphatic system is made up of fine tubes called lymphatic vessels that connect to groups of lymph nodes throughout the body.

Lymph nodes (sometimes called lymph glands) are small and bean shaped. They filter bacteria (germs) and disease from the lymph fluid. When you have an infection lymph nodes often swell as they fight the infection.

Sometimes, cancer can spread through the lymphatic system. If vulval cancer spreads in this way, it is most likely to affect the lymph nodes in the groin. 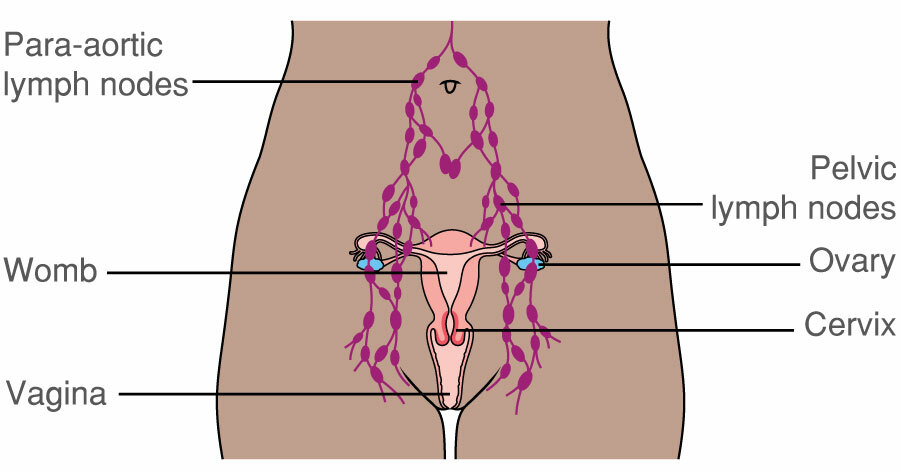