What is an acquired mutation?

Most cancers are caused by gene changes that happen in a person’s cells during their lifetime. These are called acquired mutations.

A cancer may develop because of acquired mutations in cells in a certain part of the body. For example, if genes in lung cells are damaged, lung cancer may eventually develop.

Our cells can repair a lot of this damage. But over time, enough damage may build up in a cell to allow cancer to develop. This can take many years which is why cancer is more common in older people.

What is an inherited mutation?

A gene change that is passed from parent to child is called an inherited mutation.

If you inherit a gene mutation like this, it does not mean you have cancer. It means you are more likely to develop a certain cancer.

More damage (acquired mutations) still needs to happen to the cell before a cancer can develop. The inherited gene mutation may allow this damage to build up faster.

How are genes inherited?

Genes are passed from parent to child (inherited) when a sperm and egg join to start a pregnancy (conception).

We have two copies of each gene – one from our mother and the other from our father:

You only get one copy of each of your parent’s genes. If one parent has a gene mutation, you either get the copy containing the mutation, or you do not. 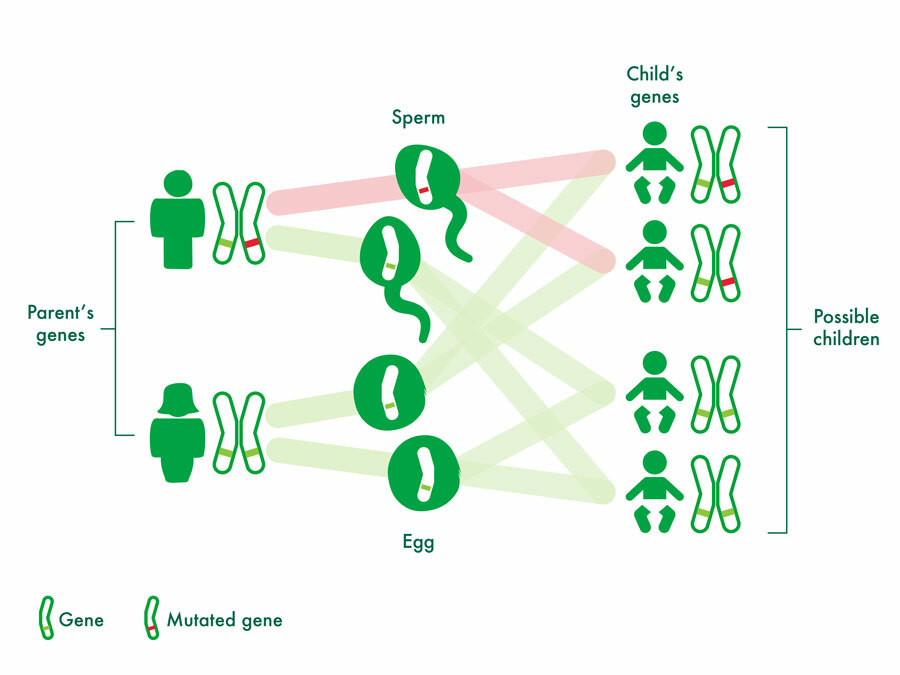 If you have the gene mutation, there is a 1 in 2 (50%) chance any children you have will inherit it.

Scientists have found many of the inherited mutations that are linked to common cancers, such as:

There are likely to be other inherited mutations that have not been found yet for these and other types of cancer.

A mutation in one gene may be linked to several types of cancer. This means a family with one inherited mutation may be affected by a group of cancers.

The most common patterns where cancers happen together are:

Less often, other patterns of cancers are seen in a family. We have more information about other inherited cancers.

Some inherited cancer genes cause a high risk of cancer. Scientists have also found other gene mutations that slightly increase the risk of cancer. These are sometimes called low-penetrance genes.

The effect of each gene mutation on its own is small. But if a person has several of these mutations, they may still have a high risk of certain cancers. These low-penetrance genes are not yet routinely tested for.

There are probably many lower-risk genes we do not know about yet. Researchers are trying to find out more about these genes and how they interact with other risk factors to cause cancer to develop.

Can cancer genes 'skip' a generation?

Cancer genes cannot ‘skip’ or miss a generation. If one of your parents has a gene mutation, there is a 1 in 2 (50%) chance it has been passed on to you. So either you inherit it or you do not.  If you do not inherit the mutation, you cannot pass it on to your children.

Sometimes it can seem like the cancer skipped a generation. This is usually because a person in the family has the mutation which is then passed on to their child. But the person does not develop cancer themselves.

Gene mutations linked to breast and ovarian cancers can pass through the father’s side of the family. A man who inherits this type of mutation is unlikely to develop breast cancer and cannot develop ovarian cancer. But he still has a 50% chance of passing it on to his children.

If his daughter inherits the mutation from him and develops breast cancer it can look like the cancer gene has skipped a generation.