Surgery involves removing all or part of the cancer with an operation. A wide local excision is the most common operation for anorectal melanoma.

This is the most common operation for anorectal melanoma. The surgeon removes the cancer and a small area (margin) around it. This reduces the risk of any cancer cells being left behind.

Some people need a bigger operation to remove the cancer. Your doctor may suggest this operation if:

For an abdominoperineal resection, the surgeon removes all of the anus and rectum and a small part of your colon. They may also remove nearby lymph nodes if the cancer has spread there.

A diagram of abdominoperineal resection (APR) 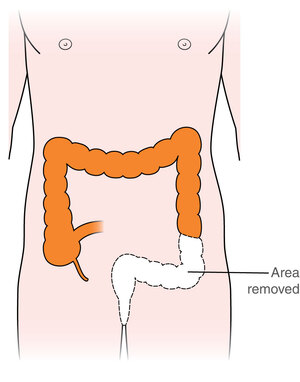 The surgeon closes the hole where the anus was. They make a cut on your abdomen (tummy) and join the end of your bowel to this opening. This is called a stoma or colostomy. Having a stoma means stools (poo) will no longer pass out of the rectum and anus in the usual way. Instead, they will pass out of the stoma into a disposable bag that is worn over it.

A diagram of a stoma or colostomy bag 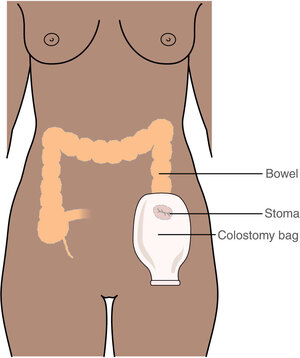 Being told you need a stoma can be distressing. Most people find they get used to the stoma over time. You will get support and advice from a stoma nurse in your hospital.

Some people have an anterior resection. This is when the surgeon removes the rectum. Sometimes the surgeon will also remove nearby lymph nodes. After the piece of bowel that contains the cancer is removed, the surgeon rejoins the two open ends of bowel. The first diagram shows the part of the bowel that is removed. 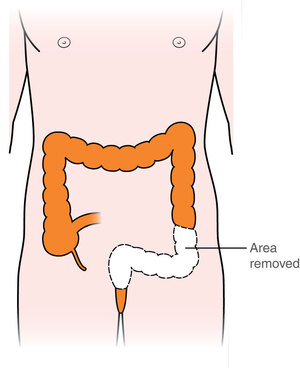 The second diagram shows how the two ends are joined together.

A diagram an anterior resection, where the two open ends of bowel have been joined together 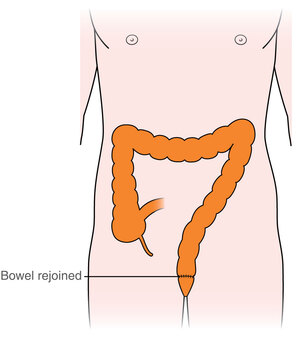 Some people may have a temporary stoma after this operation. This is an opening that is made through the tummy (abdominal) wall and connects the bowel onto the surface of the tummy. Having a stoma means stools (poo) will no longer pass out of the rectum and anus in the usual way. Instead, they will pass out of the stoma into a disposable bag that is worn over it.

People with a temporary stoma will have a second, smaller operation a few months later. This second operation is to close the stoma and rejoin the bowel. It is called a stoma reversal.

Your surgeon may remove lymph nodes as part of the operation if: