Find out more about supporting someone who has cancer and dementia, including how to get help and support.

Supporting someone with cancer and dementia

If you care for someone who has both cancer and dementia, it can be very difficult for you and the person you care for. 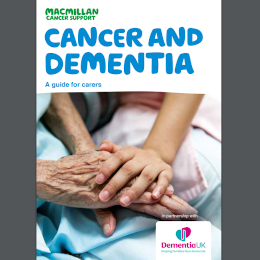 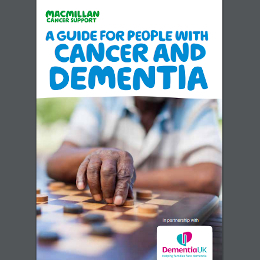 Booklets
A guide for people with cancer and dementia
Some people who have cancer also have dementia. Having both conditions can be difficult for you and the people...

Dementia is a word used to describe a set of symptoms. There are several types of dementia, so each person affected may have different symptoms. Alzheimer’s disease is the most common type of dementia.

Dementia is caused by damage to the brain. This damage is mainly from Alzheimer’s disease or strokes (vascular dementia). Symptoms will depend on what has caused the damage and what part of the brain is affected.

Dementia is usually thought of in three different stages - early, middle and late. These stages are a guide to how dementia might develop over time. But dementia is different for each person and the stage will depend on different factors, including:

Some people may not notice symptoms at first. Symptoms may come and go, while others may get worse over time (progressive). As the dementia moves into a later stage, someone with dementia may need help with everyday activities.

Sometimes the stages of dementia overlap. This may mean they need help with one type of task or activity, but can manage others on their own.

Some types of behaviour can be both challenging and distressing.

The main risk factor for both cancer and dementia is age. Most people with dementia are over 65 years old. About half (50%) of people diagnosed with cancer are over 70 years old.

Treatments for cancer and dementia

The main treatments for cancer are:

The treatment depends on:

Cancer doctors consider all these things when planning treatment. Some people may have a combination of treatments.

The cancer treatment offered to the person you care for will depend on their individual situation. But it will also depend on the stage of the dementia.

We have more information about treating cancer when someone has dementia.

Planning for the future

If someone has dementia, it is likely their ability to make decisions (mental capacity) will be affected in the future. There may be a time when they are no longer able to make decisions or communicate easily.

The person you care for may already have an idea of how they would like to be treated at the end of their life. If they are able to plan ahead, it can help you and the health professionals caring for them.

There are different ways the person you care for can plan ahead. This is sometimes known as advance care planning. Usually, this is an opportunity for them to make decisions about:

If the person you care for identifies as LGBT, this may have an impact on the treatment and care they would like to receive. An organisation called Compassion in Dying has written a guide called Your treatment and care: Planning ahead for the LGBT community that may be helpful.

It can be helpful for the person you care for to think ahead and make some decisions about where they want to be cared for in the future.

They may be able to stay at home with help and support. Or they can be cared for in a hospice or nursing home.

We have more information about short-term and long-term cancer and dementia care options.

Managing symptoms and side effects

We have more information about symptoms and side effects in someone with cancer and dementia.

There are lots of everyday things you can do to help someone living with cancer and dementia.

You do not have to cope with caring for someone on your own. Building a support network of friends, family or neighbours can make a big difference.

There are also community health and social care professionals who can support you. The type and amount of support you get will depend on where you live and how the services are organised in your area.

If you need support and services to help you care for someone in their home, you can ask the GP and district nurses to make referrals.

If the person you care for is coming home from a stay in hospital, any help and services they need can be set up so that they start when the person gets home. The hospital staff usually does this, with the help of a social worker.

Admiral Nurses provide the specialist dementia support that families need. When things get challenging or difficult, Admiral Nurses work alongside people with dementia and their families to offer:

Most Admiral Nurses work in the community for the NHS, but some work in care homes, hospitals or hospices.

To find out if there is an Admiral Nurse in your local area:

You can find out more about Admiral nurses from Dementia UK.

Caring for someone with advanced cancer

For some people, it may not be possible to control the cancer any longer. Or they may not be well enough to have treatment. If this happens, their cancer doctor or nurse will make sure they have treatments to manage any symptoms they may have. This is called palliative care.

Palliative care teams include specialist nurses and doctors. These teams specialise in controlling pain and symptoms, as well as offering emotional support. They are sometimes based in hospices and can visit people who are being cared for at home.

Community specialist palliative care nurses will work closely with the person’s GP, district nurse and other hospital services. They will tell you more about their services, how to contact them and when they are available.

Hearing that the person you care for may be near the end of their life can be very difficult and distressing. You might experience strong emotions. You may need some time on your own. Or you might want to talk things through with your partner, a relative or a close friend.

Some people find it easier to talk to someone outside their family. If you think this would be helpful, you can talk to your doctor. They may be able to refer you to a counsellor. Or you can contact the British Association of Counselling and Psychotherapy. They have information about counsellors in different areas and charities that may offer free or discounted counselling.

We have more information about caring for someone who is dying.

Looking after someone with cancer and dementia can be both rewarding and challenging. Depending on the stage of their illness, they may need lots of help with everyday activities. This could include washing, dressing and cooking.

It can be hard to know if you are getting all the help that is available and if you are supporting the person you care for in the right way.

We also have more practical information and advice about:

Finding out the person you care for has both cancer and dementia can be very upsetting. It is common to feel shocked, frightened or angry about their situation.

Talking to other people about how you feel can be helpful. Some people find it hard to talk to close family and friends. You may like to talk to someone else. Ask your GP to refer you to a counsellor or support group.

If you need more support, you can:

You may also find online communities helpful. These are online groups where other carers share their feelings and experiences. There are a few online communities where you can talk to other people going through the same thing, such as:

Cancer often means extra costs for you and the person you care for. This can include paying for travel to hospital, or increased food or heating bills. If you have to give up work or reduce your hours, your income may drop.

You and the person you care for may be eligible for benefits. A range of benefits are available for full-time carers and carers who are still working.

We have more information about getting financial help. You can call our welfare rights advisers on 0808 808 00 00 to find out more about which benefits you may be able to get.

Dementia UK’s Admiral Nurses can also give financial advice to people affected by dementia. Call them on 0800 888 6678.

If you are caring for someone, you may have to give up work or work part-time so you can be at home more. This may be a difficult time financially.

Finding a balance between work and caring can be difficult, but it is not impossible.

0808 808 00 00
7 days a week, 8am - 8pm
Email us
Get in touch via this form
Chat online
7 days a week, 8am - 8pm
Online Community
An anonymous network of people affected by cancer which is free to join. Share experiences, ask questions and talk to people who understand.
Sign up for our monthly emails
Do you have cancer or are you supporting someone who has? Fill in our short online form to receive regular emails with information to help you.
Help in your area
What's going on near you? Find out about support groups, where to get information and how to get involved with Macmillan where you live.