Staging and grading of bowel cancer

The stage and grade of bowel cancer describes its size, whether it has spread and how quickly it may develop.

The stage of a cancer describes its size and whether it has spread. Knowing the stage of a bowel cancer helps doctors decide on the best treatment for you. The most commonly used staging system is the TNM system.

N – describes whether the cancer has spread to the lymph nodes.

M – describes whether the cancer has spread to another part of the body such as the liver or lungs (secondary or metastatic cancer).

The bowel wall is made up of layers of different tissues. 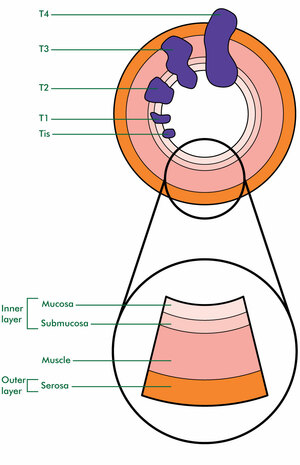 N2 means there are cancer cells in four or more nearby lymph nodes.

M0 means the cancer has not spread to distant organs.

M1 means the cancer has spread to distant organs such as the liver or lungs.

Information from the TNM system can be used to give a number stage from 0 to 4.

Stage 0 – The cancer is at its earliest stage and is only in the mucosa (Tis N0 M0).

Stage 1 – The cancer has grown into the submucosa or muscle, but has not spread to the lymph nodes or elsewhere (T1 N0 M0 or T2 N0 M0).

Stage 3 – The tumour is any size and has spread to lymph nodes nearby, but has not spread anywhere else in the body (Any T N1 M0 or Any T N2 M0).

Stage 4 – The tumour is any size. It may have spread to nearby lymph nodes. The cancer has spread to other parts of the body such as the liver or lungs (Any T Any N M1).

Tests on the bowel cancer cells

Not everyone will need all the following tests. Your doctor will explain which tests are needed in your situation.

Bowel cancer cells may be tested for micro-satellite instability (MSI). DNA carries all your genetic information inside the cell. When a cell divides normally, a repair system ensures that the new DNA is identical to the original DNA by repairing any changes to the DNA. With MSI, this repair system is faulty. This test can detect if this is the case .

Checking the blood vessels and nerves

Cancer and surrounding tissues removed during surgery are checked to see if the cancer has spread into blood vessels or nerves within the tissues. If cancer has spread into the blood vessels or nerves, it can increase the risk of the cancer spreading to other parts of the body. Knowing more about this can help you and your doctor decide whether you may need further treatment after your surgery.

Doctors may also test the bowel cancer cells for a change in the BRAF gene. The BRAF gene makes a protein that is involved in cell growth. A change to this gene means that the protein becomes overactive which can make cancer cells grow and divide more quickly.

Knowing whether you have the BRAF gene mutation can tell doctors more about how you might respond to certain treatments.