Surgery is the most common treatment for colon cancer. The type of surgery you have will depend on the size of the cancer, where it is in the bowel and whether it has spread.

Surgery is the most common treatment for colon cancer. The type of surgery you have will depend on:

There are things you can do before and after surgery to help you prepare and recover.

Very early-stage colon cancers are sometimes removed using an operation called a local resection. During this operation, the surgeon uses a colonoscope to remove the cancer from the lining of the bowel. This means the surgeon does not have to make a cut in your tummy (abdomen).

A pathologist then examines the cancer that has been removed to find out what grade it is. Your surgeon may recommend that you have a second operation to remove more of the colon. You may have this surgery if the cancer is high-grade or has not been completely removed. It is to make sure that no cancer cells are left behind.

Removing part or all of the colon

After part of the bowel has been removed, the two open ends of the bowel are joined together. Or, a stoma may need to be created instead. Usually, the lymph nodes near the colon are also removed and tested.

This is because cancer cells can spread to nearby lymph nodes.

These diagrams show the parts of the colon that are removed during these operations.

A diagram of a left hemi-colectomy 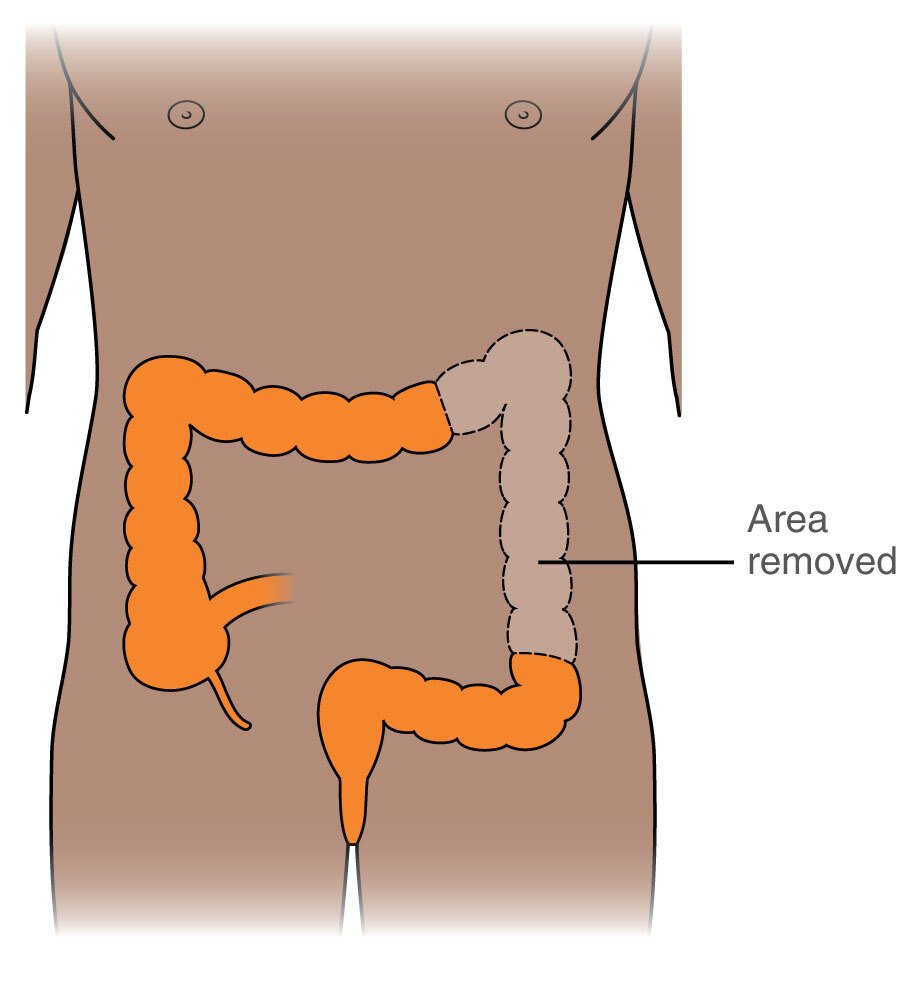 A diagram of a right hemi-colectomy 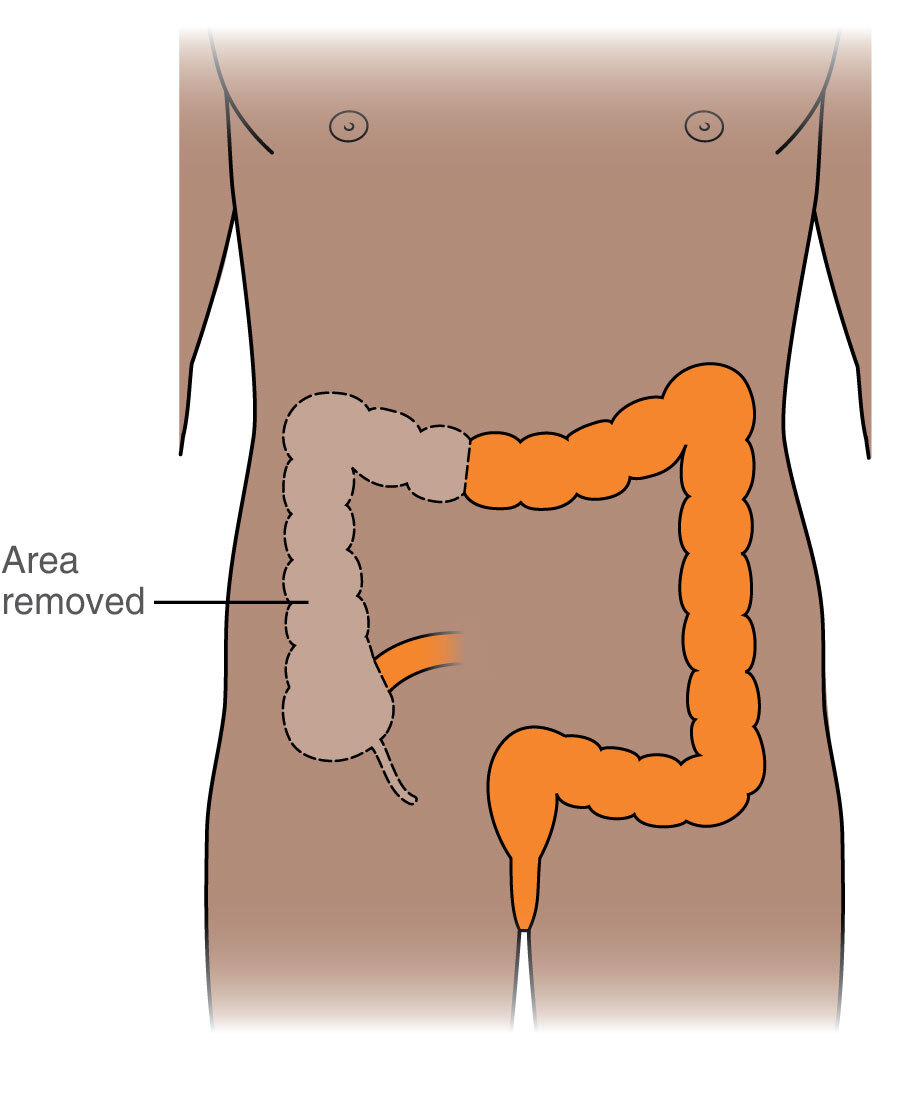 Some people have an operation to remove the sigmoid colon. This is called a sigmoid colectomy, or a high anterior resection.

A diagram of a sigmoid colectomy 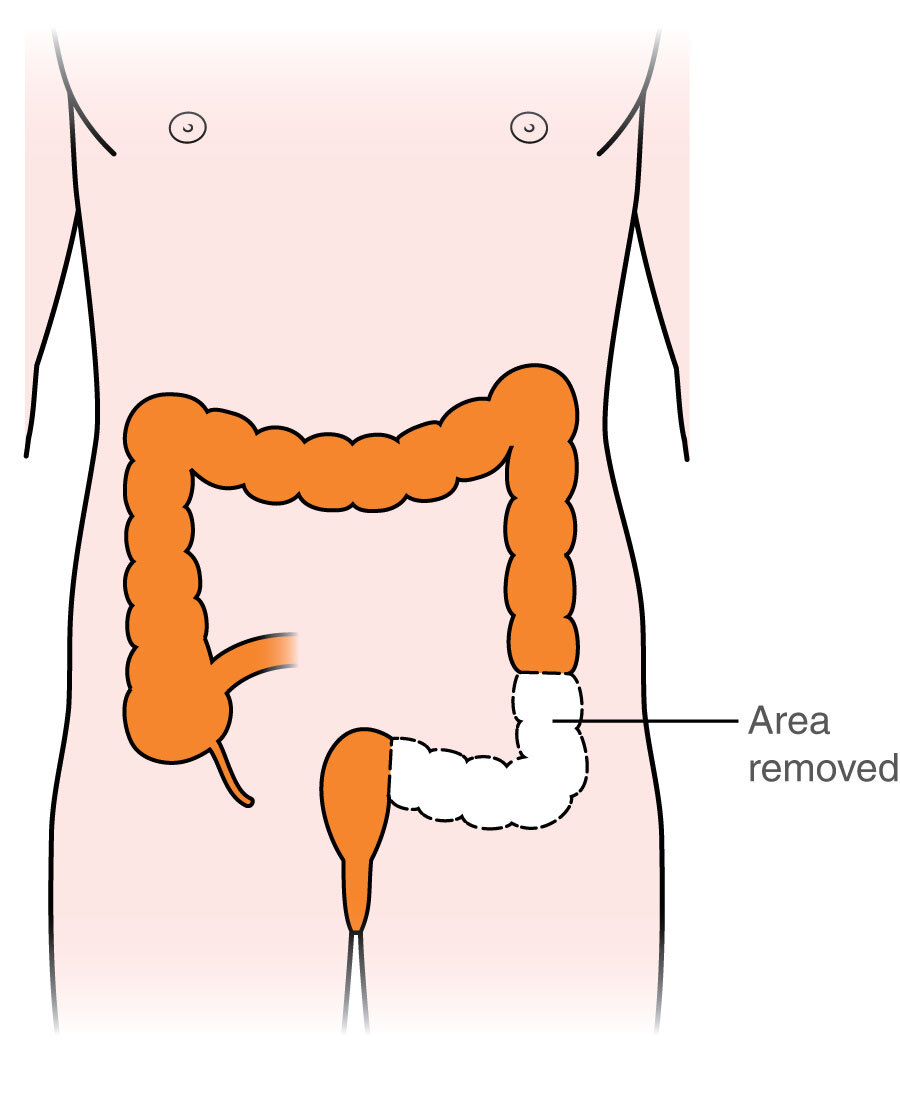 A diagram of a transverse colectomy 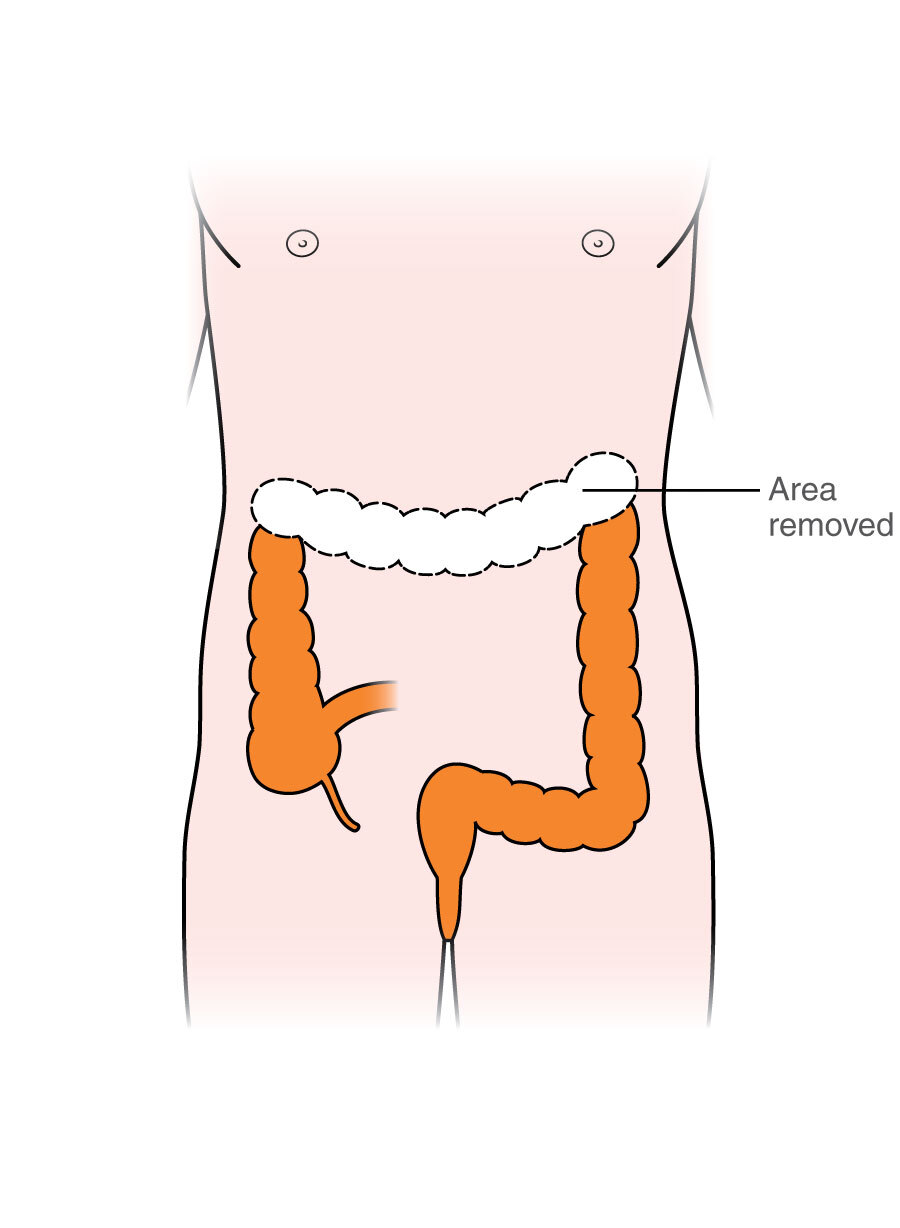 Your operation may be done as open surgery or as laparoscopic (keyhole) surgery.

Open surgery means the surgeon makes one large cut (incision), usually near the tummy button. The length of the cut depends on the size of the cancer and where it is.

Laparoscopic surgery means the surgeon makes four or five small cuts in the tummy, rather than one large cut. They pass a thin tube with a small camera (a laparoscope) into the tummy through one of the cuts. They then pass specially designed surgical tools through the other cuts to remove the cancer.

Laparoscopic surgery is sometimes called keyhole surgery, or minimally invasive surgery. You usually recover more quickly from this type of surgery than from open surgery.

Your surgeon will talk to you about which type of surgery is likely to be best in your situation.

During the operation to remove the cancer, sometimes the surgeon needs to create a stoma. This is an opening that is made through the tummy (abdominal) wall. It connects the bowel to the surface of the tummy.

We have more information about stomas.

The most common areas of the body for colon cancer to spread to are the liver and the lungs.

If the cancer has spread to the liver, the most common treatment is chemotherapy. The aim is to shrink the cancer and control it for as long as possible.

You may be able to have surgery to remove the part of the liver that is affected by the cancer. This operation is called a liver resection. It can sometimes lead to a cure.

A liver resection is a major operation. It is done by a surgeon who is experienced in liver surgery (hepatobiliary surgeon) in a specialist hospital. This treatment is only suitable for a few people with secondary liver cancer.

Sometimes the liver resection is done at the same time as an operation to remove the cancer in the colon.

If you have secondary liver cancer, you can talk to your cancer doctor about whether this surgery may be helpful for you. You may have a course of chemotherapy before a liver resection.

We have more information about secondary cancer in the liver and other treatments.

The main treatment for cancer that has spread to the lungs is chemotherapy. But you may be offered surgery to remove the affected part of the lung.

Radiofrequency ablation or microwave ablation are sometimes used to treat bowel cancer that has spread to the liver and lungs. These treatments destroy cancer cells using heat.