Surgery may also be used:

If you need surgery, your doctor will talk it over with you. They will advise you about the type of operation and how it will help.

If you smoke, try to stop smoking or cut down before your operation. This will help reduce your risk of chest problems, such as a chest infection. It will also help your wound heal after the operation. Your hospital team or GP can give you advice and support to help you give up smoking.

Your doctors may recommend you have radiotherapy or chemoradiation after surgery. This is usually when there are some cancer cells in the tissue close to where they removed the cancer.

This is a major operation to remove the anus, rectum and part of the large bowel (colon). Doctors usually only advise having an APR if:

Because an APR involves removing the anus and rectum, it means having a permanent colostomy. The surgeon moves the open end of the bowel to the surface of the tummy (abdomen). The opening is called a stoma. Your bowel motions (stools) then pass out of the body into a colostomy bag.

This can be upsetting and take time to adjust to. Your surgeon and a stoma nurse will talk it over carefully with you before the operation. Your nurse will give you a lot of support, and there are organisations that also help. 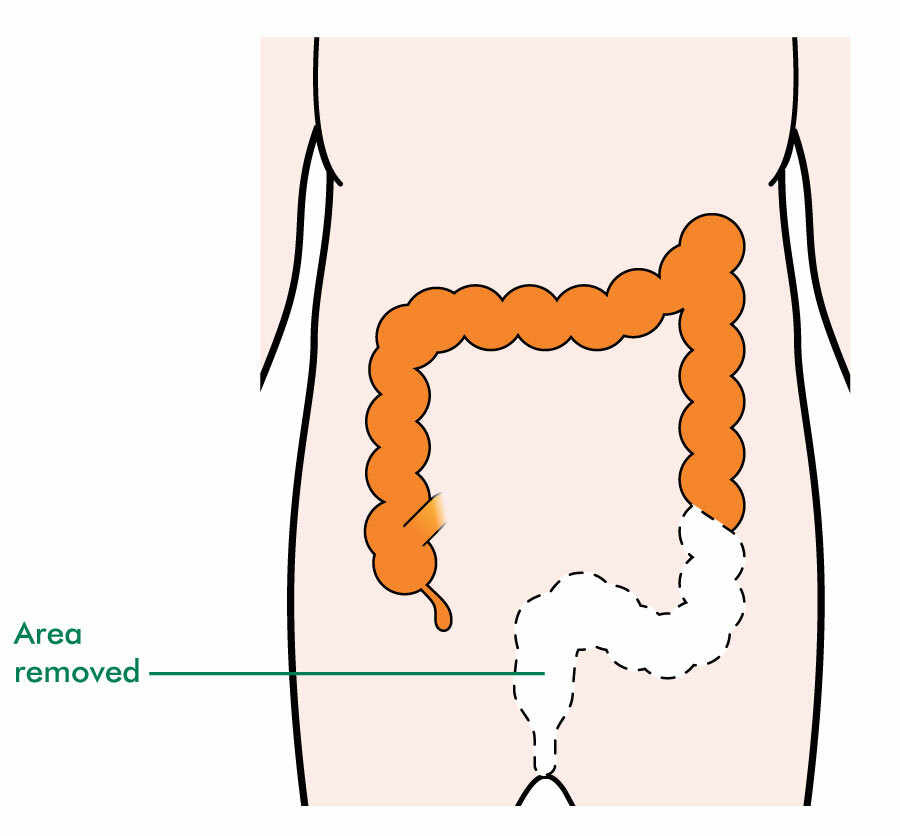 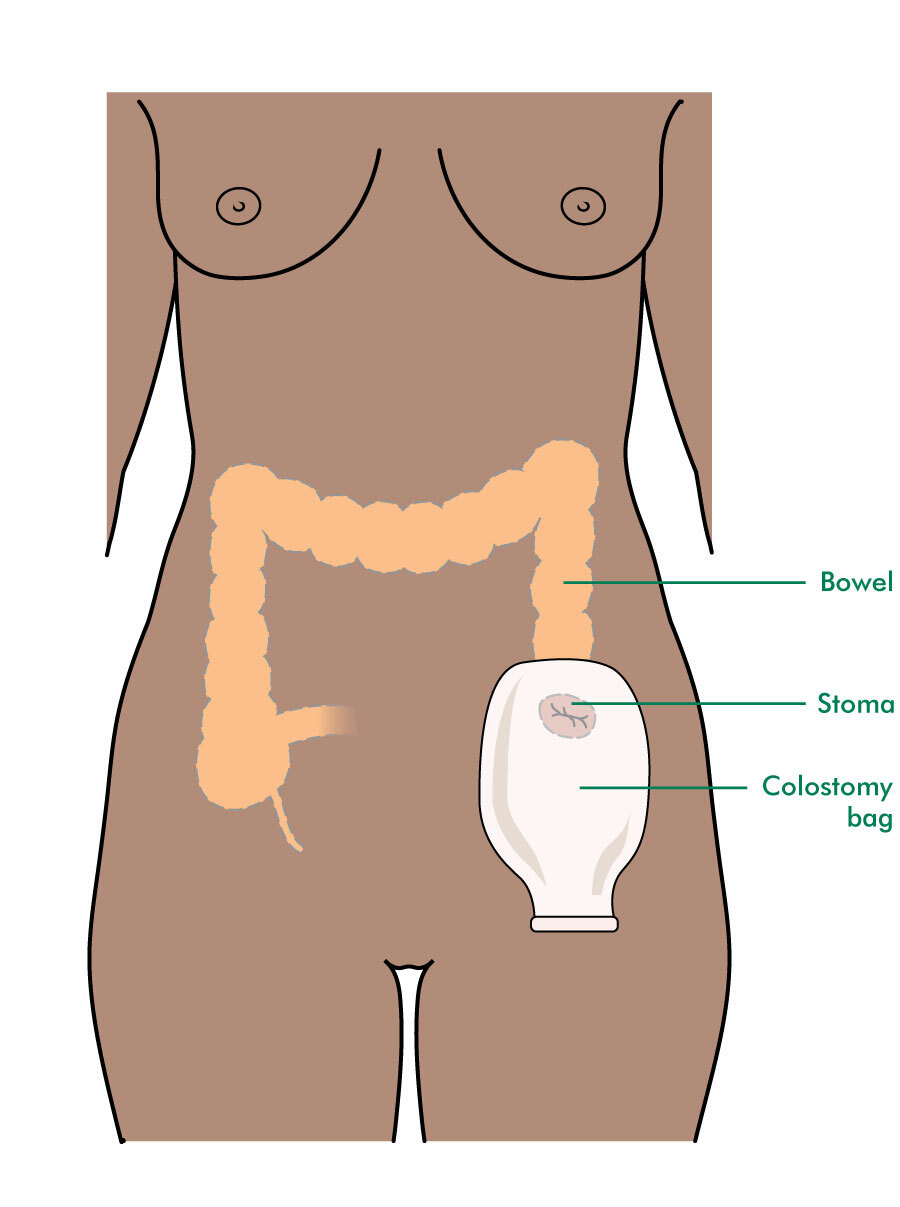 After the APR operation, you usually have two wounds. You have a tummy wound and a wound where the anus has been closed.

The anus may be closed using muscle, fat and skin from another part of the body. This is called a flap.

Sometimes an APR may be done using keyhole surgery (laparoscopic surgery). The surgeon does the operation using only four or five small cuts (about 1cm each) in your abdomen. They use specially designed instruments that can be put through these small cuts. There will still be a wound where the anus has been closed. 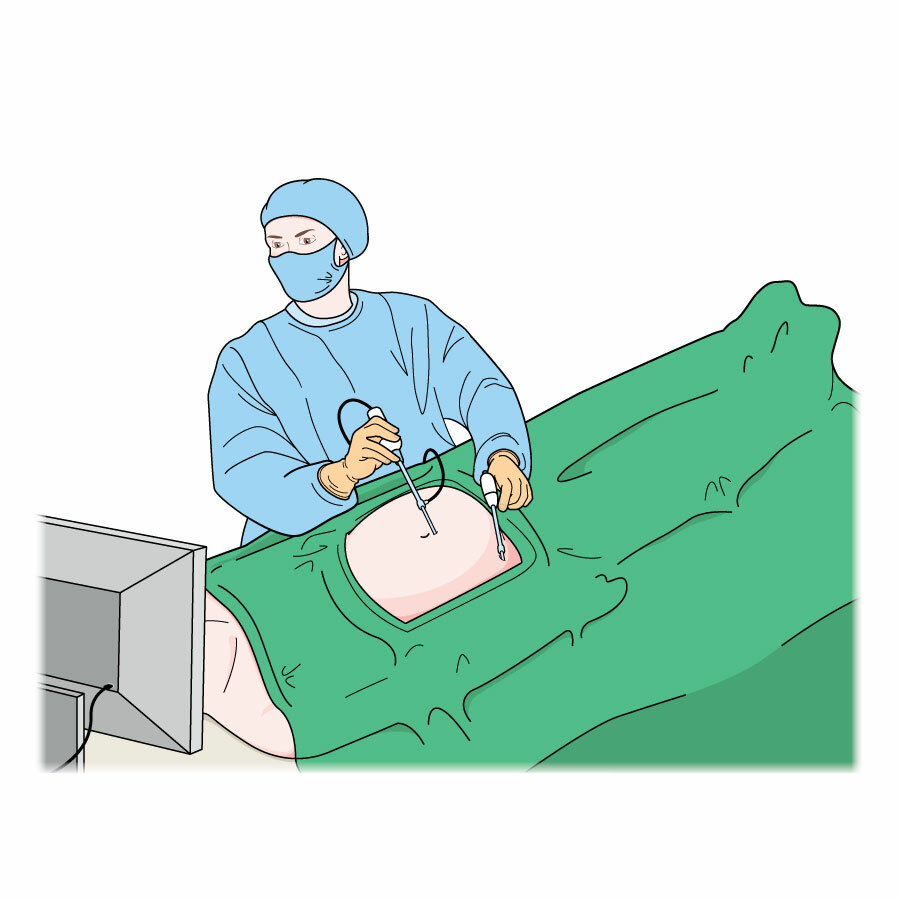 Having a temporary stoma

Occasionally some people have surgery to make a temporary stoma before they have chemoradiation.

After chemoradiation is finished, your doctors assess you to see if the stoma can be closed. This will allow you to pass stools through the anus again.

A temporary stoma may be used to relieve symptoms if:

Your operation will be carefully planned. For an APR, there may be different specialists involved. This could include a plastic surgeon and a gynaecologist if you are a woman.

You usually have a hospital appointment before your operation to have some tests and make sure you are fit enough for the operation. This is called a pre-assessment clinic.

Most hospitals follow an enhanced recovery programme, which can help reduce complications following surgery and speed up your recovery. The programme involves careful planning before your operation. This makes sure you are properly prepared and any arrangements that are needed for you to go home are already in place. You will be encouraged to:

You will be given information about what to expect after your surgery and when you can expect to go home.

After your operation you’ll be encouraged to start moving around as soon as possible, sometimes on the day of the operation.

After you’ve gone home you’ll be regularly reviewed to make sure that you’re recovering well. You can ask your doctor whether you will be suitable for this type of recovery programme. Not all hospitals use ERP for surgery and it’s not suitable for everyone.

When you wake up after surgery you will probably feel quite drowsy. You may not remember much about the first couple of hours after you wake up. A nurse will take your blood pressure regularly. Depending on the type of operation, you may have some tubes attached to your body. If you had a small operation, you may not have any tubes at all.

You may have some of the following, but not everyone will need all of these:

The pain control you need will depend on the type of operation you’ve had. Always let the nurse know if you are still in pain.

Painkillers occasionally make it difficult to have a bowel motion (constipation). If your bowels aren’t moving, let your nurses know. They can give you medicines to help them move more regularly.

After an APR, it may be uncomfortable to sit down. This will improve as the wound heals.

After your operation, you’ll be encouraged to start moving around as soon as possible. Even if you have to stay in bed, it’s important to do regular leg movements and deep-breathing exercises. A physiotherapist or nurse will explain these exercises to you.

To reduce the risk of blood clots, you will wear special stockings. You may also be given injections under the skin of a drug (heparin) that prevents blood clots.

Feeling sick or being sick

The nurse will give you anti-sickness (anti-emetic) injections or drugs to control any sickness. If you still feel sick, tell the nurse looking after you.

Your wounds may be closed with stitches, clips or staples. They are usually removed after you go home by a practice nurse at your GP surgery. Some surgeons use dissolving stitches that don’t need to be removed.

You will be able to sit on your bottom for five minutes at first.As things improve, you slowly increase this amount of time.Your doctor will give you advice about how often to change position when sitting.

You may be given antibiotics to help prevent any wound infection. While you are in hospital and after you go home, tell your nurse or doctor straight away if your wound:

This will depend on the type of operation you had. The most common complications after surgery are:

The nurses will monitor you for these. Let them know straight away if you:

Most people who have surgery go home without complications. But if you do have any problems when you get home, let a doctor know straight away.

This will depend on the type of operation you had. If it’s a small operation, you will be ready to go home after a couple of days. After a bigger operation, it may take up to 2 weeks.

If you have a stoma you will be given supplies to go home with.

You’ll be given an appointment to attend an outpatient clinic for your post-operative check-up. If you have stitches, clips or staples in your wound, these are usually taken out 7 to 10 days after surgery. Your practice nurse or a district nurse can do this.

Some people take longer than others to recover from their operation.

0808 808 00 00
7 days a week, 8am - 8pm
Email us
Get in touch via this form
Chat online
7 days a week, 8am - 8pm
Online Community
An anonymous network of people affected by cancer which is free to join. Share experiences, ask questions and talk to people who understand.
Help in your area
What's going on near you? Find out about support groups, where to get information and how to get involved with Macmillan where you live.
Get help