We understand that people with cancer are worried about coronavirus. Here is the latest guidance. We will update it regularly.

Get even more from your role

We know you’re making a huge commitment by giving your time to Macmillan. So, we want to make sure your volunteering experience is as fulfilling as possible and that you can achieve the things that matter to you. That’s the idea behind our learning and development programme.

Whatever your volunteer role, Macmillan’s comprehensive range of learning and development opportunities can help you to learn fresh skills, discover new passions and enjoy a richer experience.

Dennis (pictured), a volunteer from Ayrshire, says Macmillan’s courses have been key in helping him to achieve the things he wanted through his volunteering.

Supporting you to support others

'When my wife was diagnosed with acute myeloid leukaemia, there was very little Macmillan support in our community,’ he said. ‘We needed to travel to a hospital in Glasgow so she could have a bone marrow transplant. It was only there that we met a chap from Macmillan who offered us the support we needed. Within four days of telling him that we had money worries, we received a cheque in the post. Macmillan were so good to us, I wanted to do something for them, and I was really keen to get involved with bringing Macmillan’s support to Ayrshire.'

After his wife Winnie died, Dennis became an information and support volunteer at a brand new Macmillan drop-in service at Boots in Ayr. Later, when another service was launched in Irvine, he became a lead volunteer there. Dennis is also a lead volunteer at Crosshouse Hospital in Kilmarnock. He credits Macmillan’s courses as the reason he is able to support people affected by cancer so effectively.

'I do Macmillan’s Cancer Awareness course every two years and I always bring other volunteers along with me,' he says. 'Knowledge about cancer moves on so rapidly, so it’s important to keep up to date.

'I’ve also attended a suicide awareness course. Several people I’ve spoken to have talked about suicide because they’re going through hell, so the training proved vital.

'There are so many different sides to the cancer journey so, as a volunteer, you’ve got to have your feet on deck to be able to answer questions from people affected by cancer or signpost them to others who can help. You always need to keep learning.' 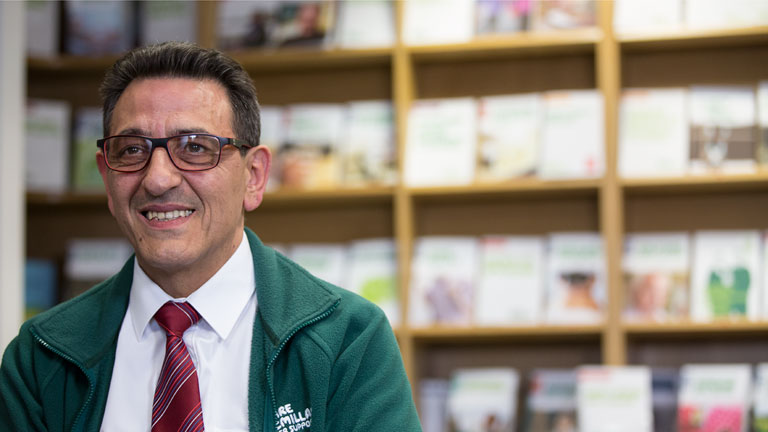 Mario on being an Information and Support Officer

‘The centre is available for anybody, not just the person who’s affected by cancer.’

As well as being an advocate of lifelong learning, Dennis, who is 72 this year, is also an enthusiastic fundraiser and constantly challenges himself to raise money in a variety of surprising ways.

Whether he’s teaching himself to bake chocolate cakes for the World’s Biggest Coffee Morning or zip-wiring across the Clyde (complete with his walking stick tucked in his harness!), he’s a fabulous example of what volunteers can achieve.

Give us a shout

Bringing our brand to life