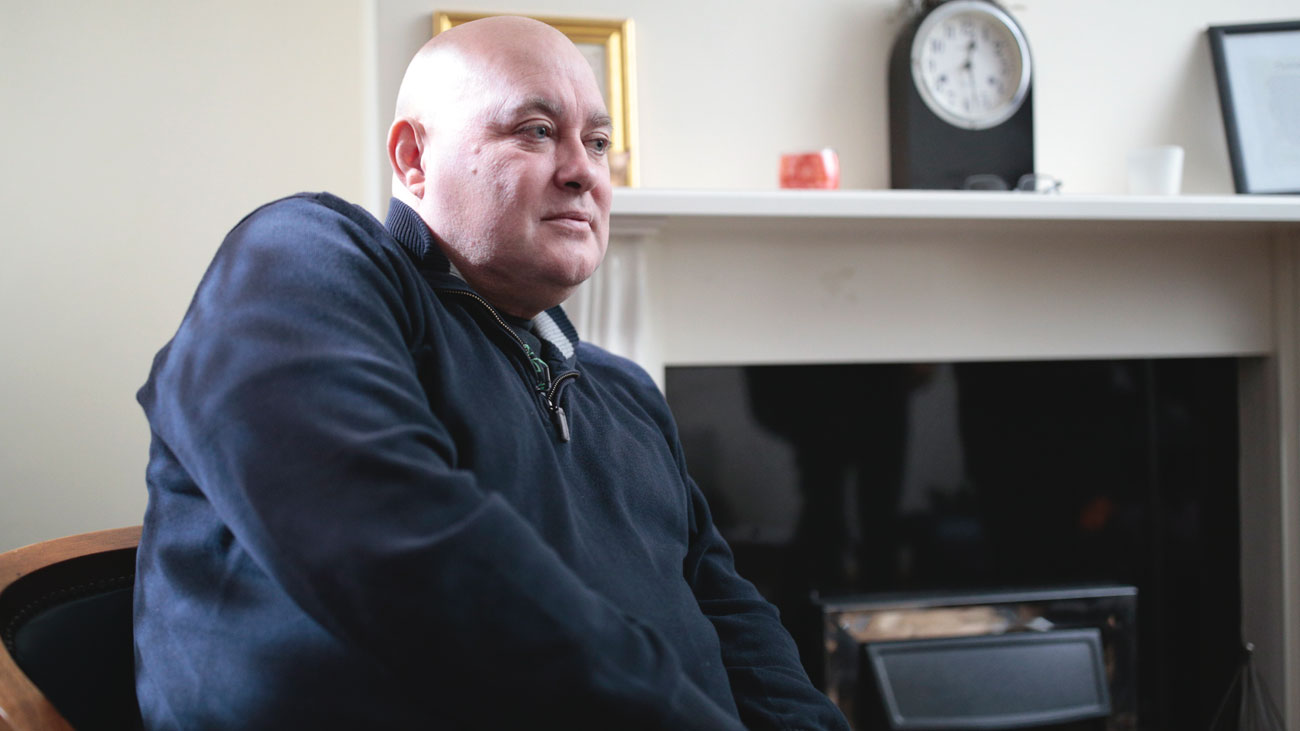 'We took a hit financially. Macmillan’s benefit advisers made a real difference.'

Anthony was diagnosed with acute myeloid leukaemia in June 2014. Anthony and his wife took a financial hit due to the cost of cancer.

Unfortunately he experienced discrimination from his employer at the time. He received information, benefits advice and counselling from Macmillan.

I noticed at the start of the year that my energy levels were seeping away. After two different misdiagnoses, I was diagnosed with leukaemia. I was shocked but also kind of comforted by the fact that they had found out what was wrong with me, so they could get to work on making me better.

After about 24 to 48 hours of being at the hospital it started to dawn on me how seriously ill I was. Then I just decided ‘I am not dying here’. I still had things I wanted to do and I was with the people who could make me better and knew what they were doing, so I would just work with them and tackle it head on. I had infections which they had to get rid of before it was time to plan some chemotherapy.

The whole thing is hard because you are fighting on two fronts; against the illness itself and against the treatment which makes you feel terrible. I was telling myself that it had to get worse to get better and that got me through it.

Despite my consultant telling me that a full recovery would take at least two years, I went back to work within six months. I disclosed my cancer diagnosis fully to my employer at the time as I wanted to be upfront about the support I needed, but it quickly became obvious the company wasn’t interested in supporting me.

It was initially agreed that I could work from home at least two days a week to help with my recovery, but in practice they made it difficult for me to do this. There were often important meetings scheduled on my days off or I was told I needed to be at head office to meet clients. It was exhausting, especially as it felt that I was constantly proving my capability more so than others in similar positions in the company.

A few months later, on a day off for further cancer treatment, I was told the company was being restructured and my role was no longer needed. I was devastated.

We took a real hit financially. My now ex-wife worked, so we were basically told that because of her wage we were not able to get any real support. I knew that it couldn’t be true and that was when we needed support. I went to Macmillan, who helped me get my PIP (Personal Independence Payment). They were fantastic. They were the only people that actually felt like they were trying to help me and see things from my point of view. They got me the payment and it was just fantastic to have that help. The Macmillan benefit advisors also made a real difference for me and understood my situation and what I needed to get done.

Travel insurance was another massive problem. The mark-ups were just insane. I have to travel with work and a lot and they wouldn’t let me travel without insurance, so it was unavoidable for me at times. Going back to work was really important to me. I needed to do it. I needed to make up for the loss of earnings I had while I was ill. It was a massive financial hit. Also my feeling, like that I’m told a lot of cancer sufferers, was that I wanted to feel useful again. I wanted to feel like I was making a contribution to society and that was really important for me.

Macmillan has been the only organisation which I think has stepped up to the plate for me in every way. It has been fantastic. I used so many leaflets and a great deal of information, including the website during my treatment.

In this video, Anthony shares his experience of the financial impact of cancer. He talks about the challenges he faced and how Macmillan supported him.

In this video, Anthony shares his experience of the financial impact of cancer. He talks about the challenges he faced and how Macmillan supported him.

Explore your work options and feel more in control:

'I was at this point where I was thinking I can’t take any more.'

Looking for additional support with benefits and financial planning? These handy interactive tools and guides can help.

Give us a break

If anyone deserves a break, isn't it someone with cancer? Help us campaign for clear and fairly priced travel insurance.

Order booklets, audio CDs and DVD about treatment. Knowing what to expect could help you plan your finances.

A place for people affected by acute myeloid leukaemia (AML) to support one another, ask questions, and share their experiences.